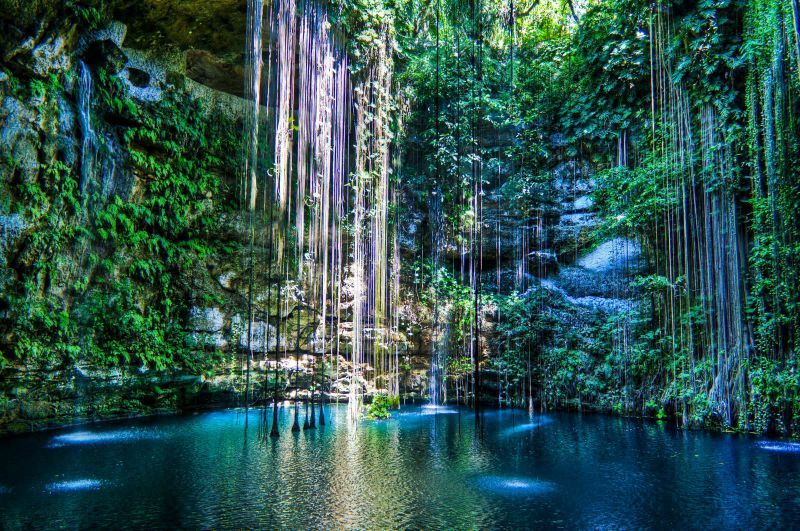 Here your chance to chase adventure and get rough and dirty at Latin America’s number one, tourist rated adventure park, Selvatica.

Your reward at the end of this great series of challenging adventures? Your chance to refresh and reset at Cenote Selvatica. You’ll feel reborn with vigor and ready to head to whatever’s next.

This cenote is separated from the ocean by a small strip of land. Instead of the many circled cenotes, Casa Cenote features a long canal that winds away from the ocean. When the sun is shining, its crystal clear waters allow you to see—with impressive clarity—all the way to the bottom. Many times, the bottom looks so near, it appears to be in near reach of your toes. When you attempt to touch with your hands, you’re amazed to realize its actually twice as deep as your eyes perceive it to be.

This is a small and cozy cenote. It has a cave, but it’s not large. Above the cave, people can dive off an approximately 12-foot ledge into the deep cenote. Even though it’s in a somewhat of a confined area, it’s the perfect place to entertain the whole family.

From an aerial perspective, this cenote looks very similar to Belize’ world famous, blue hole. It’s an impressively massive cenote in diameter. Despite its enormity, however, most people tend to congregate together near the entrance’s shore.

This small cenote has a lot of open space surrounding it. This leaves room for permanent chairs, tables, and shade-providing umbrellas. The most unique aspect of this cenote, however, is the short zipline they installed over it. Have the lifeguard clear the way for you, put on a lifejacket, jump off and hold on to the handle. Fly the through the air before letting go at a predetermined spot in the cenote. Rinse and repeat as many times as you wish.

After visiting the Mayan Ruins of Ek Balam, go visit its eponymous and beautiful cenote, Ek Balam Cenote. One feature you won’t elsewhere is the impressively tall wooden staircase along the cenotes side. If you dare, climb up and jump several yards down into the cenote.

First, visit one of the Seven Wonders of the World, Chichen Itza. Then, travel about a mile and half toward Cenote Ik Kil. Revitalize yourself in a majestic cenote idolized by the Mayans.

As the name suggests (in Spanish), this is a large and popular cenote. Google the diving pictures taken there, and be prepared to be awestruck. You can be sure, the pictures are so spectacularly majestic they’re enough motivation to visit in and of themselves.

Cenote Dos Ojos (meaning two eyes in Spanish) is connected to one of the top 10 longest underwater cave systems in the world. It contains the deepest known cave passage in Quintana Roo with a depth of nearly 400 feet. It was featured in the IMAX film of 2002, Journey Into Amazing Caves.

In what appears to be a scene from James Cameron’s Avatar, Cenote Samula has an Alamo tree extending its roots from several yards above, into the cenote for hydration. The rare and impressive vista of hanging roots entering into the cenote is a sight to behold. There you have it! That’s our guide to enjoying the top ten cenotes in the Riviera Maya! Have fun!