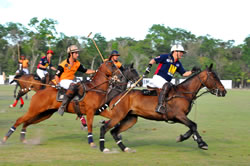 According to a few sources- The 5th Annual Copa del Rey International Polo Tournament was played this year in an exciting multi-day contest at El Rey Polo Club in Puerto Morelos. Set in the middle of the jungle, this world class field brought six teams face-to-face in this highly anticipated competition. Ranked as a 4-6 goal event this year, the Copa del Rey welcomed players from the United States, Canada, Argentina, Germany, Switzerland, Cuba, and of course, Mexico.

The 2011 Tournament was officially opened with a Mayan blessing and the soulful call of the conch shell.  Dancing, music, and the ritual burning of sage honored the field, the players and the horses during a traditional ceremony, performed by representatives of the local Maya community. In the 5 years since its inception, the Copa del Rey Polo Tournament has grown into a five day festival of fashion shows and social events mixed with the heart pounding game of polo- the sport of Kings.

In the end, GQ Magazine was unable to defend the top position and finished 6th overall. Diego Velarde of winning club Lemmus was awarded “Most Valuable Player” of this year’s championship meet.The official tournament results are as follows:

El Rey Polo Club is located on la Ruta de los Cenotes, 6 miles from the town of Puerto Morelos, 20 minutes south of Cancun, and has the only regulation polo field (300 yd x 160 yd) in the Mexican Caribbean. Open year-round, El Rey Polo Club offers lessons for beginning to advanced players, with training packages and practice sessions available, as well as a seasoned stable of horses. The polo field is flanked by a clubhouse with restaurant and banquet facilities and an infinity edge pool. The Copa del Rey tournament was inaugurated in 2007 and since then has grown into one of the most anticipated social and sporting events in the country. For more pictures of the event, please visit this online album.