Put On Your Dancing Shoes, The Carnival is About to Begin! 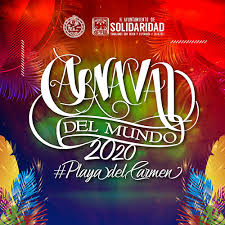 The Playa del Carmen 2020 World Carnival will be held in a completely familiar, free, alcohol-free and safe. The celebrations will take place from February 20 to 25, and in this edition the guest country will be Cuba.

At a press conference, the secretary of Social Justice and Citizen Participation, Deyanira Martínez Estrada, representing the municipal president, Laura Beristain Navarrete, announced that every day of Carnival there will be parades with floats, parades and batucadas headed by the sovereigns of these celebrations, starting from the center of the city.

On February 20 and 25, the parade will depart from 115th Avenue with Constituyentes, to end in the new Municipal Palace. On days 22 and 23, the course will leave Avenida 30 with Constituents, passing through Fifth Avenue and will end at the Fundadores Park.

All the massive concerts will be on the esplanade of the new Municipal Palace, where the star presentation of the salsa singer Luis Enrique will be held on February 25. The full cast includes Los Van Van and Pierre David, on February 20, Karenka and Cubaníssimo Show on the 21st; Isabela Marcon Show and Super Lamas, the 22; Celia Cruz All Stars and Swing Latino, on the 23rd, and Zona Rika on the 24.

Martínez Estrada invited the playenses families to join and be part of the carnival, which increasingly takes root in the city, and this year offers a colorful and wide artistic and cultural repertoire.

“Events like Carnival strengthen our culture and identity and enrich our tourism offer. They are the axes that we want to strengthen in this party that belongs to everyone, ”said Martínez Estrada.

María de Guadalupe Carrillo Suárez, secretary of Public Relations, thanked the support of the sponsors, the parades, contestants to sovereigns, the batucadas, the musical ensembles and all the people involved to strengthen this party, which will feature four days of colorful and colorful walks.

Meanwhile, Luis Ernesto López Vargas, general director of the Municipal Institute of Culture and Arts (IMCAS), stressed that diversity will be what will characterize this edition of the Carnival, which will feature a wide repertoire of local, national and international artists.

To guarantee the safety of the hundreds of families that will attend both the festivities and the open-air concerts, the Ministry of Public Security and Municipal Transit will deploy around 300 preventive police officers, who will be in charge of the road.