Justin Thomas gets ace in third round, takes lead in Mexico 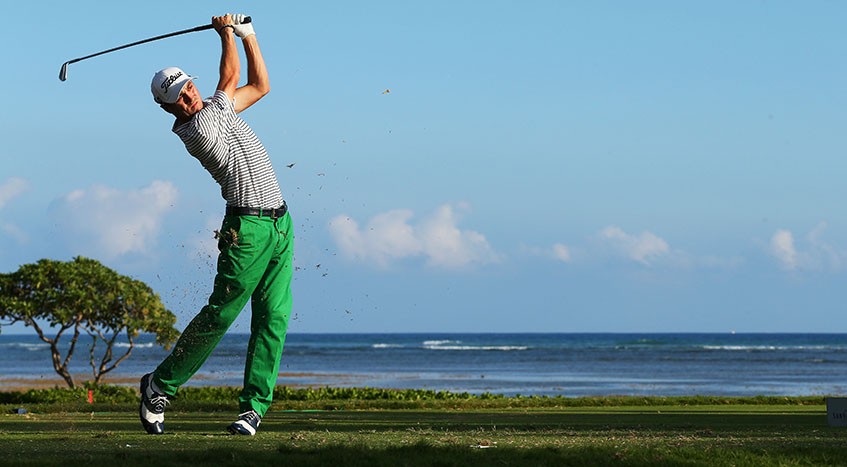 MEXICO CITY (AP) — Justin Thomas hit a 6-iron that one-hopped into the bottom of the cup. Dustin Johnson hit a wedge that never came down from a tree. In one of the 10 fairways that Phil Mickelson missed, a spectator apparently ran off with his golf ball.

Even better than the wild action Saturday in the Mexico Championship was the promise of more to come.

Thomas, going for his fourth PGA Tour victory of the season, rode a hole-in-one to a 5-under 66 to take a one-shot lead over Dustin Johnson at Chapultepec Golf Club. Right behind were Mickelson and Rory McIlroy, who saw his momentum stall when his flip wedge on No. 12 struck the pin and spun back.

Such a world-class leaderboard should have been enough to delight the crowd at Chapultepec Golf Club.

It was how they got there that made it so entertaining.

Thomas was lingering around the leaders, trying to piece together a swing, when he was caught between clubs from 239 yards away on the par-3 13th. He hit 6-iron and sent the crowd into delirium when it bounced once and disappeared into the cup.

“It looked perfect,” he said. “I think I said, ‘Go in.’ You might as well say it,” Thomas said while watching the shot on a TV monitor. “I haven’t hit too many shots exactly how I wanted. I liked this result.”

Johnson was tied for the lead when his second shot on the 16th got stuck in a tree. He had no choice but to walk back to the original spot and hit his fourth shot that settled 15 feet from the cup. Just his luck, the ball fell out of the tree as he was walking to the green.

“It happens,” Johnson shrugged after a 66. “I did make a nice putt for bogey, though, so I was definitely happy about that.”

Johnson is happy when he sees any putt fall into the cup. He is swing as beautifully as he did at Riviera two weeks ago when he won by five shots, but missing seven out of 15 putts from inside 7 feet has made him wonder if the greens are conspiring against him.

“If it’s not the greens — someone is playing goalie up by the hole — the trees are catching my ball,” Johnson said.

No one was more wild than Mickelson, who used to thrive on such scrambling skills. This time, he was disappointed. Mickelson thought he had those big misses off the tee out of his system, but they returned in a big way on Saturday. He missed seven out of eight fairways in one stretch, and through 12 holes, he had more drops than he had birdies. He still managed a par when the spectator made off with his golf ball. He managed par after taking a drop from a sprinkler into bushes.

He still managed a 68, and was just two shots behind.

“I’ve shot numbers like this hitting shots like that and salvaging strokes, but I’ve been playing better than that,” Mickelson said, clearly disappointed. “That looks like the way I’ve hit it the last three years — all over the place and saving shot. I haven’t been doing that this year. I wanted to come out here and strike the ball the way I’ve been striking it, and then to hit it the way I did was disappointing.”