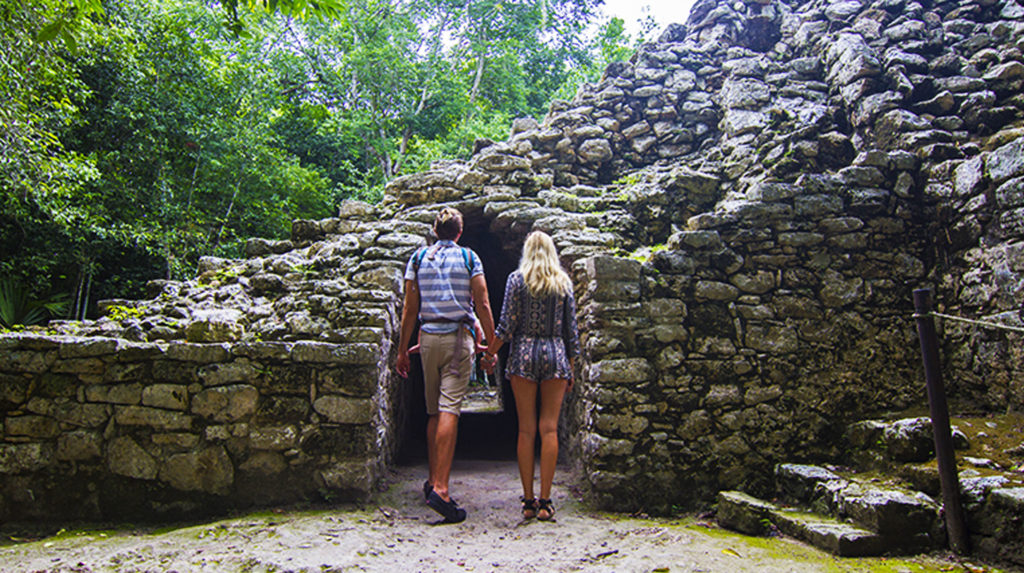 Through the monuments of these fortresses, the spirits of the past travel: the Mayan gods. These kings of the Yucatan Peninsula and rulers of the Caribbean Sea have not ceased to inhabit this region bathed in sunlight. They live in these archaeological zones in Quintana Roo. The shelters of the past where mysticism and architectural brilliance have never stopped breathing. Know them and go into each of them.

Located in the eastern portion of the current town of Cobá, in the municipality of Tulum, this archaeological site is the jewel best kept by the Quintana Roo nature. Its name translates as “water with moss” or “moisture of water”. It was built with a monumental Petén style architecture. In the settlement survive more than 6 thousand 500 structures in addition to some pyramids where “The Church” stands out as the largest. From the city of Cancún you can access the site by federal highway 307 Cancún-Chetumal.

The archaeological site of El Meco consists of 14 structures that lie between the coast and a large lagoon. The center of all worship falls on the great Mayan pyramid 41 feet high. This building has a temple on top. It is one of the best preserved sites of the various archaeological sites in Quintana Roo. The Meco is located approximately six kilometers north of Cancun.

Located at kilometer 18 of Boulevard Kukulcán, in the hotel zone of Cancun, El Rey is as its name says. This ancient Mayan city has 47 stone structures where colors and details of the past can be perceived. Some walls continue showing old paintings. The area is currently inhabited by a large colony of iguanas that have made this place their home. By being here, you can feed these animals without any danger.

Magical town and third most visited archaeological zone of Mexico, Tulum is the most beautiful enclave of Quintana Roo. The ancient city stands out for its fascinating architecture, watched over by the sea, as well as an impressive Mayan visual aesthetic. It is located on the top of a hill where each dawn colors its body. It is located 128 kilometers south of Cancún and is easily accessible via federal highway 370.

Surely the names of these archaeological sites in Quintana Roo do not sound as familiar as the previous ones. And is that, despite locating very south of the entity, the beauty of these areas has remained as perfect as from the first day. The architecture of the site is Petén style. Its most emblematic buildings are Temples I and II as well as the Xibalbá squares and the buildings of the Captives and the Toucans. Both settlements are connected by white roads and green paths.

The name of this zone comes from the English cohoonridge that means corozal or lomerío de corozos. Kohunlich has an area of ​​8.5 hectares surrounded by forests. It houses a large number of architectural ensembles of ceremonial and residential type. Some of its most impressive buildings are the Templo de los Mascarones, the Palacio de las Estelas, LaGradería and El Rey. It is located 69 kilometers west of the city of Chetumal, capital of the state of Quintana Roo.

The immensity of Oxtankah has allowed it to be the most important and largest pre-Hispanic site in the Chetumal Bay. Some sources mention that this area could be the Chactemal, the scene of the first documented miscegenation. The place is adorned by various buildings, temples, palaces, squares, sunken patios and isolated buildings. The natural conservation of the site is ideal to frame the great historical legacy of the region.

Located near the eastern coast of Quintana Roo, the archaeological site of Muyil was an important center of commerce. Most of its buildings have an architectural style of the coast. Proof of this is its emblematic El Castillo building. The features of this building show the influence of Petén. The remains of Mayan blue and red paint and the original wooden lintels confirm the enormous architectural treasures of the region. One of the most impressive archaeological sites in Quintana Roo.