Cigars: Pleasure of the Gods 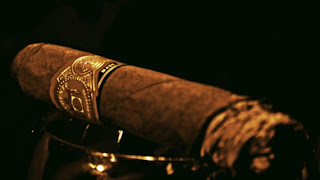 While you are on vacation in Mexico it is very hard not to notice, whether you are a smoker or not, the incredibly low prices of tobacco. But I don’t wish to talk about mere cigarettes or chewing-tobacco, today I’m talking about one of the most elegant, sophisticated, pleasant and legal ways of squandering money; Cigars.
The first modern observation of the cigar occurred with the arrival of Christopher Columbus in the New World. On October 28, 1492 Columbus noted in his log reports that the natives of San Salvador burned and inhaled the leaves of a local plant. Rodrigo de Xeres, a lieutenant on Columbus’s expedition became the first European to smoke the Indian’s form of a Cigar. Rodrigo smoked on every subsequent day of the expedition.
The Indians in South and Central America did not smoke cigars as we know them today. The natives smoked tobacco wrapped in maize, palm or other native vegetation. The Spanish created the cigar industry, and are given credit for creating the modern cigar. These days the Cigar is a world-wide earthly pleasure and a refined way to pass the time.
So when you happen to be strolling through the streets of Playa del Carmen or other top tourist destinations in the Riviera Maya, take some time to stop at some of the many tobacco shops that you undoubtedly find. In these stores you will find a plentiful variety of cigars from many different nationalities, including some of Mexico’s best cohibas and of course, Cuban Havanas.
Whether you’re an avid fan of smoking cigars and are very particular as to how to go about doing so or simply wish to try one for the time, you will find the prices of such tobacco incredibly low in retrospect of prices in North America.
One word of warning however, no matter where you are, there is no such thing for a true Cuban or fine Mexican cigar for only a dollar. They simply don’t exist; sure you can find cheap, smelly “chacuacos” but just know you will be completely missing a true experience of the gods. Avoid tobacco vendors that advertise such prices and also carry a myriad of other products. To assure true quality, be certain only on purchase cigars from true tobacconists. These people will also be able to point out the varieties and the difference in qualities to match your desired price.
Who knows, you may find yourself an elitist cigar connoisseur, just remember; Cigars are not a vice, they are a pleasure and are to be smoked in the perfect moment, never to be rushed or hurried, simply enjoyed.
www.American-Development.com