One of the things that Mexico is well-renowned for one of the world’s most loved alcoholic creations: Tequila. Undoubtedly Mexico’s national drink, tequila is now as welcomed at home in Westernized culture as whisky or wine.

Tequila is made only from the blue agave plant (unlike Mezcal of which can use 11 differing varieties of agave plant), primarily in the area surrounding the city of Tequila, nearby Guadalajara, and in the highlands of the western Mexican state of Jalisco. The blue Agave grows differently depending on the region. Blue agaves grown in the Highlands region are larger in size and sweeter in aroma and taste. Agaves harvested in the Lowlands, on the other hand, have a more herbaceous fragrance and flavour. 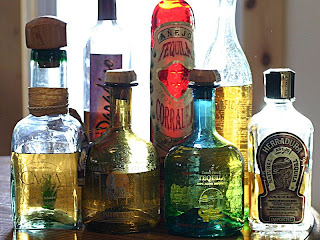 Long before the arrival of the Spanish on Mexico’s shores in 1521, the Aztec people had previously made a fermented beverage from the agave plant, which they called pulque. When the Spanish conquistadors ran out of their own brandy, they began to distill agave to produce North America’s first indigenous distilled spirit, Mezcal wine as it was called, tequila’s grandparent. It was also variously called mezcal brandy, agave wine, mezcal tequila and finally simply tequila—appropriately named after Tequila, a small town in a valley in Jalisco state, México. The word Tequila itself is said to be an ancient Nahuatl term. The Nahuatl were the original people who lived in the area. The word means “the place of harvesting plants.”

Given the relatively strict regulations for producing Tequila, there are still a myriad of ways to produce differing variations of tequila, depending on the distilling process it can be smooth or rough, the age of the tequila and the type of barrel used vary the quality and taste of the tequila along with many other factors.

Price is not a good way to judge the taste of tequila. Fancy packaging, designer bottles, large advertising campaigns makes up a lot of the pricing of a bottle of tequila. A well-advertised, bottled and well promoted blanco at $100 is not necessarily a better buy than a reposado at $10. It depends on your taste and what you expect in a tequila. In Mexico, there is a large market of excellent tequilas available from $20 to $50. In the under $20 range most of the tequilas are mass produced for the local market, and usually not 100% agave. Tequila priced above that is aiming mostly for the premium markets using collector bottles and speciality bottles.

Playa del Carmen is inundated with stores you can purchase tequila at much lower prices than in the US or Canada not to mention availability of the finest tequilas not found in either of these countries. Patron is even considered on the lower end of tequila qualities here so be sure to get adventurous when choosing which one to take home with you.

The taste is the ultimate deciding factor. People have different tastes when it comes to tequilas. Some prefer the rough edged, more distinct flavor of young blanco tequila. Others like the sharper, peppery flavour of a reposado. And then there are some that prefer the smooth, woody aroma in an anejo. Whatever your taste, there is tequila made just for you. Fer from All About Playa