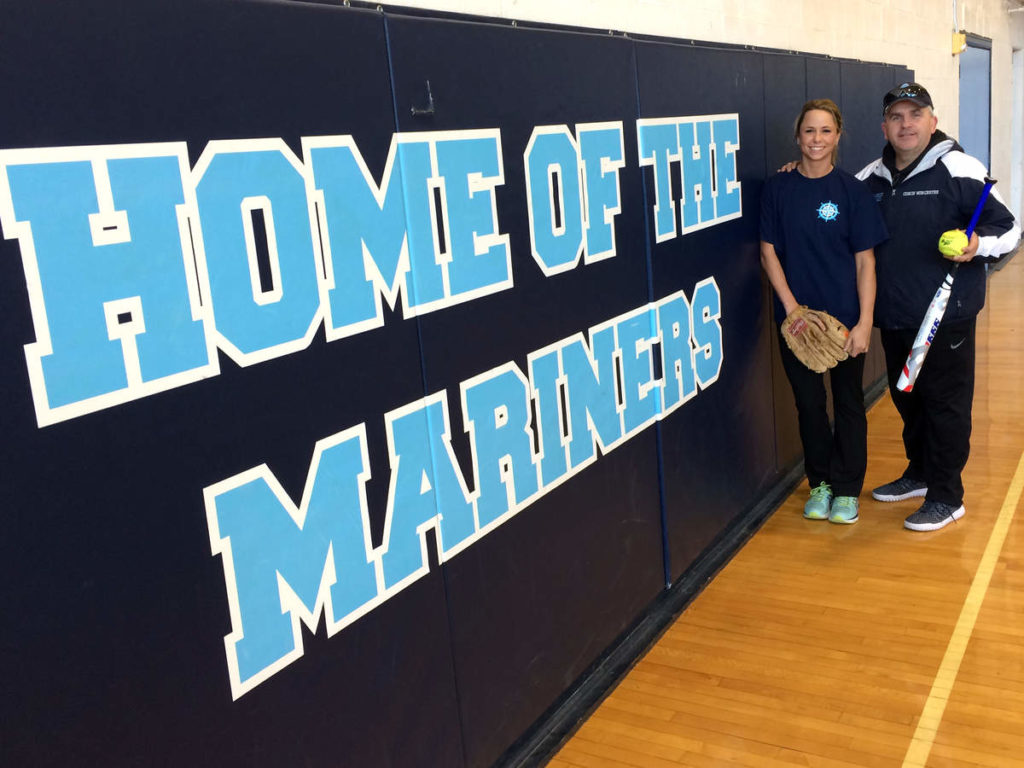 ROCKLAND — About 15 years ago, Rachel Campbell and Rusty Worcester created an unbreakable bond as high school player and coach and the love, admiration and respect between the two forged then essentially has come full circle for one of the most important days in Campbell’s life.

Campbell and Worcester first connected as athlete and coach at Georges Valley High School and, after they spent four years making memories with their diamond adventures, the two kept in touch.

In fact, Campbell eventually returned to teach and coach in the Midcoast and now, as fate would have it, is the Oceanside High School varsity softball assistant to longtime coach Worcester.

The two have a rapport, an unwavering connection, a mutual respect and, above all else, the love of a “daughter” and “parent.”

In fact, Worcester first served as a coach and teacher for Campbell, but has grown to be a second father for the 31-year-old, and many of his “softball daughters” over his 17-year coaching career at Georges Valley and Oceanside.

And as a father-figure and someone Campbell admires, she asked Worcester, her second dad, to play a crucial role in one of the most important days of her life — namely, her wedding.

And the two, along with family and friends, traveled far from home to witness Campbell tie the knot.

Campbell and Jon Burns will be married, on a beach, on Friday, April 7 in Riviera Maya, Mexico. And Worcester will officiate the ceremony.

Campbell said she and Burns wanted to have a more “intimate, private” ceremony that included about 35 friends and family. And there was no better place then Mexico to make that happen. “We wanted something to make it a little more special, exciting and fun,” she said.

Campbell’s father, Linwood, died four years ago and, thus, she decided, when she got married she would have her mom, Jody McKee, walk her down the aisle. However, she also needed someone important to officiate the ceremony.

And that person was Worcester.

“When my father passed away in 2012, Rusty was there for me in all aspects,” Campbell said. “He never would try to replace my father’s role. He’s there to fill the void for me and be that father-figure I need in my life. So when I got engaged in 2015 he was at the top of my list of asking to be part of my wedding.

“Originally my father would’ve been walking me down the aisle and performing the services. So now I have my mother walking me and Rusty as the officiant. Pretty perfect in my eyes. When you have these important people in your life, you want them with you for all important events in your life.”

And Worcester simply had to be the person to play a crucial role in the wedding. Because, in Campbell eyes, Worcester is dad number two.

“As you grow up, there are very few people in life that you make a connection with and feel inspired by,” Campbell said. “Rusty has always been a role model to me because not only was he a coach on the field, he was a coach in life too. Rusty is the type of person who cares about everyone else more than himself. He inspires all to try their hardest, he builds self-esteem by helping all players believe in themselves, and gives real-life advice to help us find our purpose in life.

“He always took an interest in his players’ lives and really showed in so many ways that he cared. This is something that meant so much to me playing for him for four years. I grew to respect him and care about him and his life too. He helped me find the love and passion for the game too. But I also always wanted to make him proud as an athlete and as a person, on-and-off the field.”

She said, obviously, there is no one else she would want to play such an important role in her big moment.

“It is an honor,” Worcester said. “I have always been one from March to June, I don’t do anything other than softball. In life, you have to look at what is brought to you and presented to you, and this is a special moment, a once-in-a-lifetime moment, and it is an honor to be asked and looked upon like that. It is a pleasure and honor for me to just be a part of it.”

Burns, 32, from Union, is a 2002 graduate of Medomak Valley High School. Campbell is a 2004 graduate of GVHS. Burns played baseball for the Panthers and Campbell was a standout soccer, basketball and softball player for the Buccaneers.

Campbell, who teaches seventh-grade social studies at Oceanside Middle School and is a topnotch photographer, has coached softball, basketball and soccer in recent years, as well as being Worcester’s right-hand woman at the varsity softball level the past few years. Campbell also played a year of softball at the University of Southern Maine. She played four years of first base for Worcester during her high school years.

In fact, as the two joked, being part of Campbell’s wedding must have been pretty important for Worcester because he took a week away from coaching his high school softball team — something he simply does not do.

Worcester’s illustrious coaching career includes 228 wins, 52 losses and state championships at Oceanside (2013) and Georges Valley (2007 and 2008), as well as league and regional titles to his credit.

He said as a coach, every year, he takes a vested interest in the lives of his young student-athletes. There is a love that is created between the coaches and players. He likes to call them his “softball daughters.”

He said as any father, he will praise the players when they work hard and play well and help them find a way to correct things that do not go quite as planned.

“I really take that to heart,” he said. “You are a family from March to June. And it is special honor when you connect with someone, like Rachel and I have, and I get goosebumps just thinking about when she asked me to do this. I said, ‘Of course I will. It is an honor.’ ”

Campbell said she originally tried hard to plan the wedding and trip around the softball season, knowing how much the sport, program and team mean to both of them, but the wedding date ended up being during the Mariners’ preseason, essentially the preparation time for the upcoming regular season.

Worcester, who has spent 34 years in the Maine Department of Corrections (Bolduc facility in Warren), said he simply had to learn to let go and realize that junior varsity coach Mike McGuire could keep the Mariner ship chugging along for a few days without him and Campbell.

“I am excited to make different memories with people and new experiences,” Campbell said of the trip to Mexico. “This is just another special thing we can all share together.”

“Once we get back, we will go as hard at it as we always do,” Worcester said of softball. “But I am very much looking forward to [the wedding], it is going to be a very special event.”

Campbell said after the coach and player created the initial bond, she and Worcester stayed in touch after her high school days.

“That’s what you do when you have coach, a father-figure, and a role model in your life,” she said. “No matter where life takes you, you remember that person who helped shape who you are today. Now that I’m coaching with him, I can take all the skills I learned from him when I played for him and use it in my own coaching techniques. He’s a true inspiration to watch and learn from as a coach. To be coaching next to him is truly an honor and I still learn so much from him every day. How to carry yourself professionally and respectfully on the field. These traits I still use every day in my own life as well. He’s a coach, role model, friend, and forever dad number two.”

The two also have proven the perfect combination to coach the high school girls because Worcester, a veteran leader, is more of a fatherly figure to the players, one who supports and teaches them, but also will get on them if needed.

Campbell brings a female perspective to the table and a complete understanding of how teenagers feel and think — because she has been in their shoes before.

So that works well for the two coaches.

“It is very cool to be on this side of the coaching compared to when your a player in the program you see one side of someone, so it is kind of cool to be on both sides, to see what I use to see and what the girls see now,” Campbell said. “It is surreal I guess.”

Worcester and longtime assistant John Frye coached the softball teams together for years, but now Campbell has brought a different perspective to the position.

“It actually has brought a different dynamic because of her being a female,” Worcester said. “She has been able to bring another part of what John and I really couldn’t bring, because of being a female. And also, she brings a new set of eyes, and what she sees. I tell her she has free input to tell me what she sees.

“One thing that is really big is she obviously is talented at working out, she is in top [physical] shape, so she can take the girls and do exercises” and implement that type of program, beyond just the softball part. Campbell has been pivotal in helping the girls develop core strength.

Worcester said it is nice to look over at the first-base coaching box and see Campbell standing in a spot a few feet from where she manned the actual base as a player all those years ago.

Worcester said, even though he is closing in on two decades in the dugout, he still goes about his coaching business the same.

“I look at the team and see what our strengths are and I don’t just have one way of doing things,” he said. “You see what you have and use those different skills. One year I might have a bunch of ballerinas who can fly and we would steal bases, then you could have some sluggers and you try to crank home runs, doubles and triples. You have to be flexible and always looking to better your team. I don’t know it all by any means and I’m always looking for more information to make us better.”

Information that now comes from one of his “softball daughters,” his soon-to-be married “softball daughter.” And when that special time arrives, Worcester will have a front-row seat, so to speak, and be one proud dad number two.