Is This the Right Time to Invest in Mexican Real Estate? 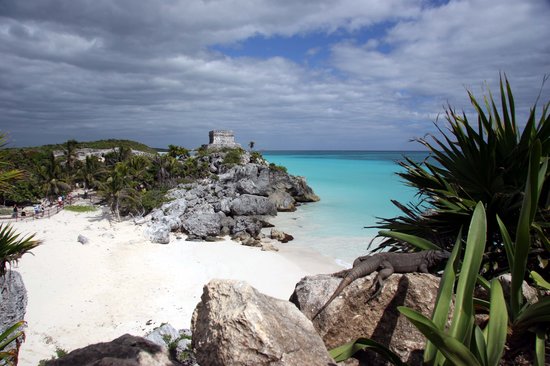 Kathy and Ken Brady were looking to invest some money when their research took them to the town of Tulum on Mexico’s Yucatan Peninsula.

The couple, who rent an apartment on New York’s Upper East Side, paid about $320,000 of their savings for 2 hectares, or nearly 6 acres.

The land is covered in jungle overgrowth, Brady says, while she and her husband, 62, who works in construction design, wait for it to increase in value. And so far it has.

“I’d say it’s appreciated more than 12 percent since we bought it,” Kathy Brady said. “They’re building an airport nearby, so it should go up even higher, and then we can sell it for development. Where else can you get that type of return these days?”

The Bradys, and others like them, are part of a move toward investing in Mexican real estate.

“We’re starting to see purchasing again in Mexico,” said Ron Hatfield, president of Del Mar Development in Los Cabos, Mexico, who builds higher-end housing there. “We sold around $67 million worth of homes so far this year. And other developments in Cabo are doing well, too.”

“One of the biggest myths is that the government here can take someone’s land. But that’s not true.””-Owner, InvestmentPropertiesMexico.com, Sean O’Neal

While the real estate market in Mexico avoided the severe crash seen in the U.S. and other countries from the global economic crisis of 2008-2009, it did suffer a slowdown. Investment money dried up, while Americans and other foreign nationals sold their properties at low prices to cut losses back home.

But there’s been a turnaround of sorts — with a slowly expanding Mexican economy coupled with the hope that recent presidential election results will provide internal stability — that’s providing opportunities, analysts say. (More:Crime Explodes — But an Economy Booms)

“Prices in Mexico are going up slowly but are still low,” said Alston Boyd, chairman of the International Committee of the Texas Association of Realtors, who has worked in Mexico. “It’s a good time to buy there and a cheaper place to live.”

With changes in the constitution over the years, the Mexican government has made it easier for foreigners to buy land.

“One of the biggest myths is that the government here can take someone’s land. But that’s not completely true,” said Sean O’Neal, who was the broker for the Bradys and runs InvestmentPropertiesMexico.com out of Playa Del Carmen, Mexico.

What is true is that since 1995, foreigners can buy and sell property in Mexico through a Direct Property Deed. That gives them outright ownership — which means the land or home or both cannot be taken over by the Mexican government.

There is, however, a different set of rules for property on Mexico’s coast line and borders. Foreigners can buy property within 60 miles of the border and 30 miles of the coast but must do so through what’s called a “fideicomiso.”

“Basically it’s a trust set up through a local bank that holds the deed for a buyer, but they retain all the rights of ownership,” said Jaime Zaga Hadid, a tax partner withBDO USA LLp.

Each trust lasts for 50 years but can be renewed after that. The property is not part of the bank’s assets, and the owner can build, renovate, rent, sell or pass on the property to their heirs.

Where Mexico does have power to take land, like the U.S., is in its eminent domain clause in the constitution. However, it was modified in 1994 under the North American Free Trade Agreement to limit any land takeover to a “public purpose.” But that is rare and includes a payoff.

“They have to give you fair value for the property plus interest when they do eminent domain,” said O’Neal, who has lived in Mexico for six years with his wife and two children after moving from California.

Most of the transactions for buying and selling are done in cash, but financing is available from U.S. institutions and real estate developers as well as Mexican banks — though usually at higher interest rates than their foreign counterparts.

Besides direct purchasing, Mexico has expanded real estate investing by offering its first-ever real estate investment trust in March 2011. Listed on the Mexican stock exchange, the Fibra Uno REIT sold some $300 million worth of shares, with a third bought by foreign investors, in its first go-round. More REITs are expected to follow.

“There’s capital gains tax for the U.S. if the property is sold,” said Brent Lipschultz, a partner in the accounting firm EisnerAmper. “There’s tax implications with rental real estate as well, and with investing in a REIT. It’s important that people report any income to the IRS from foreign property and work with someone who knows international tax issues.” (Want to know more about U.S. taxes?)

“There’s a sales transaction fee that can be 3 to 6 percent of the deal, and you will pay annual property taxes in Mexico up to 1 percent of the land’s value,” said Hadid. “Owners will also pay capital gains in Mexico when they sell.”

Along with taxes, investors face a Mexican housing market that’s still in the midst of recovering.

“There are certain weaknesses in Latin America for nearly 20 years,” says Hadid. “Right now Mexicans are looking at existing homes closer to their work to save money, as opposed to buying new homes. That means new home sales are down.”

Besides taxes and the economy, investors have to deal with a much more serious issue when it comes to Mexican property — the continued deadly drug violence. (More:Mexico’s Image Problem With Tourists)

“Mexico to me is just like any other place, in that you don’t want to be in the wrong place at the wrong time,” said Hatfield. “You just need to be wise about what you do. Mexico’s a tourist destination, and the government doesn’t want to lose that, so it’s doing what it can to stem the violence.”

The newly elected government is actually a return of the Institutional Revolutionary Party or PRI, that didn’t impose a war on drug lords when it was in power six years ago. Some say that’s a better way to handle the problem. But the killings have taken a toll.

“Most of it is centered in particular areas like along the border with the U.S., but it’s headline news and still a concern,” says Jim Worms, Chairman and CEO Paladin Realty Partners, a U.S. based investment firm that has been active in Latin America for nearly two decades. “There are fewer institutional investors now than a few years ago because of it.”

“I have a 3-year-old and 7-month-old, and I would pull up stakes if I felt there was any danger,” said O’Neal, who says most of his current international buyers are Canadians, Americans and Italians. “The PRI won’t allow the drug cartels to stop people from coming here.”

“We always worry about the money we used, but time will tell if it pays off,” Brady said. “We’re praying and hoping every day that it will.”