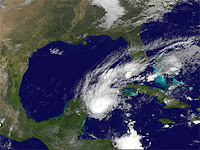 Hurricane Paula roared off Mexico’s top vacation resort of Cancun on Wednesday without immediate reports of major damage, and it was projected to veer into western Cuba’s cigar-producing country.

The Category 2 storm, with maximum sustained winds of 100 mph, swiped at the island of Cozumel and Isla Mujeres overnight on a northward advance and was about 60 miles southeast of Cancun early Wednesday.

The U.S. National Hurricane Center said Paula was expected to shift to the northeast and weaken slightly on a course that would carry it into western Cuba by Wednesday night or early Thursday.

CBS News’ Portia Siegelbaum reports that, as of Wednesday morning, no evactuations had been ordered in western Cuba. The top Communist Party official in the region was meeting with other authorities to discuss how to proceed. Siegelbaum reports that Cuba generally errs on the side of caution, evacuating all residents and livestock in the path of potentially damaging floods.

There were no immediate reports of major problems in Cancun or other resort areas. Quintana Roo state officials said they could guarantee the security of all 27,000 tourists currently in the state during the October off-season.

They ordered the evacuation of 1,500 residents of Isla Holbox and 60 fishermen from Isla Contoy. The evacuees were taken to the town of Kantunilkin on the mainland.

More than 1,800 tourists remained on Cozumel after authorities suspended all sea transportation. City officials said three shelters were available on the island but that only a family of six had arrived at one of them late Tuesday.

Quintana Roo state prosecutors said in a statement that a U.S. man drowned when he went swimming in heavy surf near his hotel. Mickey Goodwin, a 54-year-old Texas resident, ignored warnings and red flags alerting the dangerous waters, the statement said.

Dozens of boat owners in Cancun hauled yachts and other vessels to shore, while sea tour operators canceled reservations.

Armando Galmiche closed down his water-skiing tour business in Cancun and canceled 15 reservations he had for Tuesday afternoon.

“It’s already low season for tourism and, with this hurricane, things are going to get worse,” he said, lamenting the loss of revenue.

Along Cancun’s popular strip of night clubs and discotheques, workers took down billboards and other large objects ahead of heavy winds.

Peter Bruin, a 25-year-old tourist from Rotterdam, the Netherlands, was taking a stroll along the city’s hotel zone, unaware that a hurricane was heading to Cancun.

“I hadn’t heard anything but I’m not afraid,” Bruin said. “It will be my first hurricane experience.”

Early Wednesday, the hurricane was centered about 60 miles east-northeast of Cozumel, and about 100 miles southwest of the western tip of Cuba.