History of the Mexican Wrestling Mask 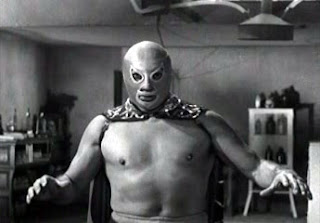 One thing that is iconic of many little souvenir stores in top tourist destinations of Mexico like Cancún and Playa del Carmel are the many bold and vibrant “Lucha Libre” adornments on display, or more commonly known as the Mexican wrestling mask.
Listed as one of the most popular souvenirs one must purchase while on vacation here, they may seem to you and I like little more than mere novelties to wear for fun as a good laugh and an opportunity for some priceless photographic memories, but in reality, they are in fact very much part of Mexican history and pop culture dating all the way back to early the 1900’s.
Here’s a brief history for you –
In the early 1900’s, Mexico was in the middle of a Revolution against the current dictatorship of Porfirio Díaz.  As with many times of war, the public looked for diversions to distract them from the every day realities of the fighting around them.  Two Italian businessmen, Giovanni Reselevich and Antonio Fournier began promoting fights, in which opponents fought each other hand to hand, without weapons or protection.  These fights were known as Lucha Libre, or ‘free fight’, and were notorious for their lack of regulations and violence inflicted upon the luchadores, or fighters. Some may draw comparisons with the early days of cage fighting which has now become the international sensation of the UFC.
The use of Lucha Libre masks had been a part of Lucha Libre since its inception, however, it wasn’t popularized until the introduction of Santo, El Enmascarado de Plata, or “Saint, the Silver Masked Man”.  El Santo made his debut in the summer of 1942, and quickly captured the public’s fascination with his fighting ability and mysterious secret identity.
El Santo moved quickly to build his name. He switched from being a bad guy to being one of the científicos, the “babyfaces” or good guys, who were naturally more popular. He cultivated his reputation out of the ring and became known for being polite, generous, honest, and kind to children. And most important: he never removed his mask. Rene Cardona, the late film director who made dozens of Santo movies, said: “He was Santo because he never showed his face. He would leave the set with his mask still on. In the studio commissary he ate wearing a mask with a hole for his chin so he could move his jaw.” When a film crew traveled to Miami for a shoot, Santo flew on a different plane so nobody on the production would see his face when he removed his mask for customs. In his films he even wore his mask when sleeping and also in his more romantic scenes.
Through wrestling, and also films and comic books, Santo became the first Latin American superhero, popular in places as far away as Lebanon. His mask was the equivalent of Superman’s “S”—instantly and universally recognizable. Journalists assured fans that despite his fame, when he walked the streets without his mask he blended with the crowd, just a humble member of Mexico City’s millions.
In the wake of Santo’s success, Lucha Libre began to become more distinctly Mexican. An innovation in the 1940s was the mask-versus-mask match. The promoters saw that the audience loved the mystery of masks; how better to excite them than with a glimpse of what lay below? The rules are simple: the loser of the bout is stripped of his mask and can never wear one again. His face is exposed to the multitudes, and his real name is published throughout the country. The unmasking is a moment of the highest drama; a mythic figure is about to plunge back down to the ranks of the all-too-human. From now on, no matter how threatening and defiant the wrestler is, the audience will always have something on him: his true identity. He is an object of ridicule and almost of pity. Wrestlers agree to mask-versus-mask matches because to lose means a big payday. They can lose their mask only once in a career, so they can demand up to a year’s salary for one night’s work.
Lucha Libre is now Mexico’s second most popular spectator sport after soccer. Any night of the week, it can be seen in any one of at least 10 arenas across Mexico City, some holding more than 15,000 fans. It has spawned a whole genre of cartoonish adventure movies, dozens of wrestling magazines, and the most-watched weekly sports shows. So next time you look at a Mexican wrestling mask and contemplate purchasing one, you now know that you aren’t just buying a humorous souvenir, but an actual piece of the Mexican culture.
Be sure to view the complete list of 17 souvenirs you must buy in mexico.